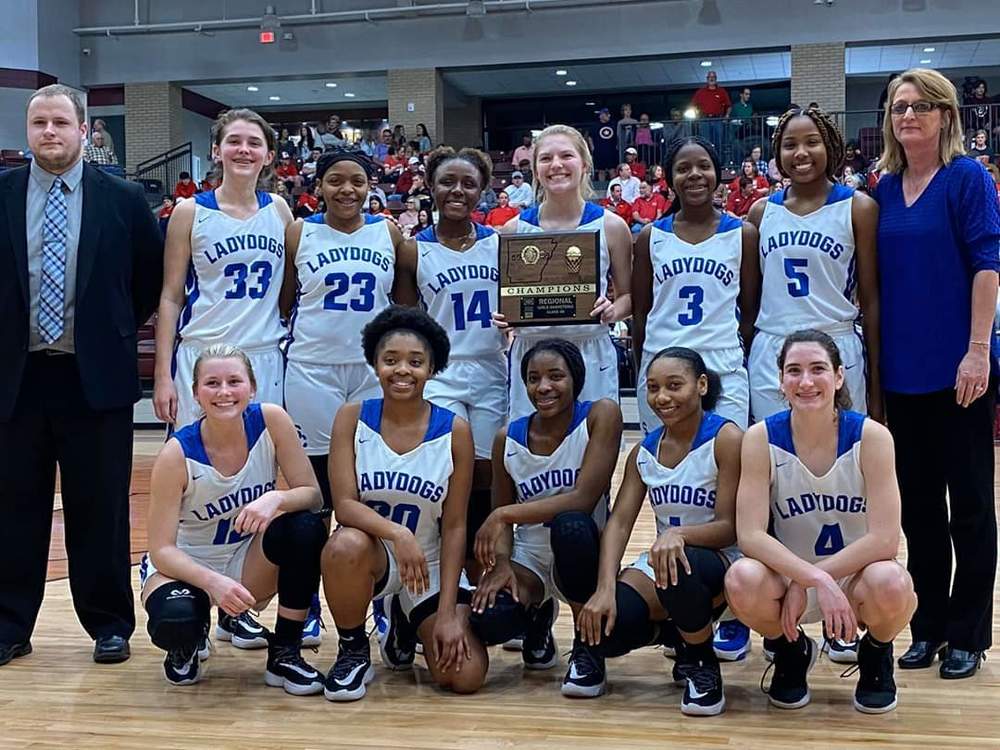 Arkansas Democrat Gazette Article by Erick Taylor - March 29, 2020 Throughout her lengthy head coaching career at Star City, Becky Yarbrough has usually been the one taking the matter-of-fact approach to games, but she quickly realized things would be different for her and the Lady Bulldogs during the 2019-2020 season.

“From Day 1, the girls were really about their business and not just before games,” she said about her team. “They approached practice the same way, too. Their work ethic every day, they’d come in and work hard from start to finish. They were just really businesslike throughout the year.”

That no-nonsense type of attitude was one of the primary reasons why Yarbrough’s 29th season as the Lady Bulldogs’ coach was one of her most pleasurable.

“Oh my Lord, it was such an enjoyable year,” said Yarbrough, the Arkansas Democrat-Gazette All-Arkansas Preps Girls Basketball Coach of the Year. “It was so much fun because the girls did everything they were supposed to do, and it started in practice. Whenever I blew the whistle, they were there ready to go. I never had to get on any of the kids for not going hard, and there was no drama.

“They would come in, get their jobs done and go hard in doing it.”

The Lady Bulldogs’ practice habits spilled over into the regular season and postseason. Star City went 32-0 and ended as the only undefeated girls’ team in the state. The Lady Bulldogs were also 32 minutes away from possibly winning a third state championship before the Arkansas Activities Association postponed the remaining eight state final games because of the coronavirus pandemic.

But for Yarbrough, nothing can take away from what the Lady Bulldogs were able to accomplish beforehand.

Seven of Star City’s victories came against teams that captured their respective conferences and 13 were over teams that earned state tournament berths. The Lady Bulldogs also won 22 games by 12 points or more, including an impressive 33-point pasting of Class 6A playoff participant Mount St. Mary.

“The chemistry was good right from the start,” added Yarbrough, who’s won more than 750 games as a coach. “They peaked at the right time and still kept getting better and better. When that happened, you could see the confidence starting to increase, which helped us tremendously because this group wasn’t very big.

“That competitive nature in them … they’re really a close-knit group that played hard for each other. They didn’t want to let their teammates down. As a coach, you absolutely love to see that out of your players.”

Star City was at a size disadvantage for the bulk of its games, but that allowed Yarbrough, a stickler for defense, a chance to re-emphasize just how important that end of the floor was to the team’s success. The Lady Bulldogs allowed less than 34 points per game, with Yarbrough using the smaller size as a strength. Ball pressure, particularly on the perimeter, enabled Star City to create a bevy of turnovers as well as throw teams off whenever they tried to attack the interior.

That strategy paid off particularly during the Class 4A state tournament where turnovers in the fourth quarter helped the Lady Bulldogs beat both Southside Bates-ville and Pulaski Academy. Star City may not get an opportunity to see how its year-long attack fares in the championship game against a Farmington team that has seven players on its roster 5-9 or taller. Yarbrough still holds out hope that her team will get a chance to test its mettle, but like the other 15 coaches who had to tell their teams that their finals games were postponed, she’s not sure if that’ll happen.

“I think everyone was in shock when they first got the news that everything was on hold,” she said. “I’d get phone calls or texts, and then I think it really hit them a little later. They were really disappointed of course, but we all know the safety and health of everybody involved has to come first. We understand that.

“These kids are 32-0, and the ultimate goal was to get to the state championship game, and they did. I’m very disappointed and hate that they didn’t get a chance to experience it. I hope they look back at the journey of getting there because that was the fun part of the whole year.”

That joy extended to Yarbrough, who had just two seniors on this year’s roster. All five starters are set to return next season, including juniors Janiya Johnson and Breanna Grayson. However, this season remains a special one for Yarbrough.

“There just weren’t any side distractions like the ones you’d normally have throughout a season,” she said “There were no attitude problems, no jealousy. They were just a really good group of kids.

“If you can go through a year with teenage girls and have no drama, no jealousy, that’s a great coaching experience no matter where you’re at.”

Yarbrough at a glance: